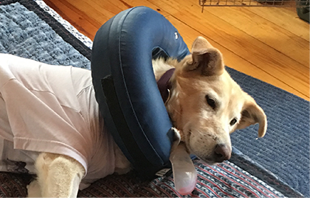 We’ve had some shifting around in the hierarchy of the female insiders. Perhaps it’s over our new un-neutered inside male dog, Floppy (who has an appointment to get fixed on Monday Jan. 9th).

Spike has asserted that she wants to be Floppy’s girlfriend, as well as the Queenie of the insider females. Maude also likes Floppy.

Whatever the reason, Mira and Maude attacked Spike last night right before dinner, and Nikki joined in. Maya stood in the sidelines cheering them on and Floppy was confused about it all thinking “Should I join in? Wait, that’s my girlfriend.”

This was a fight where they were latched on. I pulled Mira off and she jumped back on. I was screaming loudly, so Greg (who was in the dog yard) could hear me. Thankfully he did hear me and came running up. By the time he got there, I had gotten Mira off and locked her in a pen. Maude had stopped attacking, and Nikki was the only dog on top of Spike.

We quickly assessed Spike and saw that she needed staples or stitches. Greg voted we take her to the emergency vet instead of us stapling her, which was a good decision on his part.

We put Spike in the car, finished feeding the insiders and outsiders, and at around 7:00pm made the 1.5 hour drive to the emergency vet in Peterborough.

Turns out Spike had 2-3 broken vertebrae (the doc called it certebrae– which I’ve never heard of) and the wound on her abdomen went all the way through to her diaphragm and punctured a hole causing a sucking chest wound.

We left her overnight at the emergency vet and will possibly pick her up this evening, depending on how she is doing. She’ll need to be kept quiet and inactive for around 2 weeks.