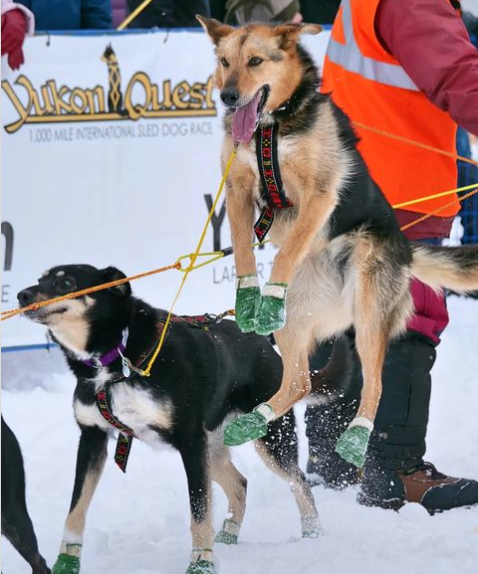 When we lived in Fairbanks, I had signed up for the YQ 300 twice, but never got to the starting line, so the Stinkers were very excited to finish our first YQ race, albeit shorter than the traditional mid-distance YQ 300 race.

The Stinkers are pretty slow compared to competitive teams, at a pace of around 7.3 miles per hour, and my estimated finish time, including the four hour layover at the checkpoint, was just under 18 hours. In reality, we completed the race in 17 hours and 31 minutes.

The morning before the race the Stinkers saddled up and drove to Whitehorse for a vet check. We were so happy to see Dr. Pinto! We know Dr. Pinto from Fairbanks, and spent many a late night at the After Hours Veterinary Emergency Clinic, where Doc. Pinto tended to our pets.

At the vet check, the Stinkers’ vaccine records were checked, as well as our human COVID vaccination records, I signed posters, and all of the dogs joining me on the run were examined.

The 9 Stinkers who made the team were:

I was quite sad that Haines didn’t make the team because she wanted to go and is an awesome sled dog, but her career ended due to being diagnosed with SLO (Symmetrical Lupoid Onychodystrophy)– which is a disease where a dog’s toenails fall off and is quite painful.

The doc noted that Snowflake had splits on all four paws– so pink ointment and booties were a must; that Justice needed some dental work; and that Geri was beginning to develop cataracts.

At the mushers’ meeting the night before the race, I drew bib #21– which meant I was the first of the 100 miler mushers to leave the start line the next day.

We were given a trail report by one of the Rangers who helped to put the trail in (Thanks Rangers for putting the trail in!).  According to the Ranger, it was around twenty-four miles from the start to the Takhini Overland Parking area and twenty-four from Takhini to the checkpoint– so a total of forty-eight miles; and we were warned about overflow sections on the Yukon River.

We arrived at Shipyards Park at 1:00pm and started getting ready for our 3:30pm departure.  The parking lot was super organized with pie plates designated for musher trucks.

Turns out, the Freedom Convoy was taking place the same day at the same spot! The honking and loud music wasn’t too bad and didn’t disturb the dogs too much.

The race officials came around and did a gear check– and all Stinky gear was accounted for.  Here’s a checklist of required gear and other “stuff” I brought.

Getting to the Starting Line

Start to the Time Station #1

Also within the first 5 to 8 miles, we encountered overflow on the Yukon River. Since I never raced with this team before and these specific dogs never encountered overflow before, I wasn’t sure how they would react. I’ve had many dogs that flat out refused to get their delicate feet wet!

Just before the overflow I saw a gaggle of snowmachiners, including one of the race organizers hanging out in a flock, so I expected something was up. Unfortunately, I didn’t pick up my drag pad fast enough, and my sled go stuck in the overflow– multiple times. I stepped down to get leverage to push the sled and ended up in watery slush up to my thighs. Luckily, it was warm out and I was wearing my heavy duty Apocalypse Design bibs. I managed to get the sled moving, only to repeat getting stuck. Finally, we got out of the overflow section and were on our merry way. My leaders Allie and Axel, as well as the entire team did wonderfully and didn’t mind getting wet. In fact, while swimming in the overflow some of them stopped to have a quick drink.

As a side note, I had asked champion musher MP about booties in these types of conditions (in certain conditions after going through overflow mushers will stop and remove booties). She said since it’s so warm out, don’t bother taking off booties after the overflow– unless you hear the booties knocking, and that in these conditions they would dry out fairly quickly. This advise was super! Thanks MP!

After the overflow, I was waiting for other teams to pass us. I was able to watch two teams go through the overflow and figured they would be right behind me.

We mushed along the Yukon River saying hello to spectators and eventually crossed under the Takhini Bridge. Now we were on the Takhini River. The four teams behind me still hadn’t passed. I kept looking back.

At mile twenty-four, we were not yet at the Takhini Overland Trail parking area, and remembered that for Greg’s Montane Ultra race– from the start to the parking area was thirty miles– not twenty-four. If felt like forever to get to mile thirty– and finally we made it!  We were at the Takhini Overland Trail parking area. This parking area is heavily used by bison hunters, and I had been concerned that the Stinkers would get confused with all of the trucks parked, but when we got there– the lot was empty and we mushed right on by.

We had run this next section of trail several weeks before, so the Stinkers were familiar with it. However this time, the trail wasn’t lovely and flat, instead there were tons of moguls and the ride was quite bumpy.  By now nighttime had arrived and I turned on my headlamp.

There are a couple of  hills on this section, and most of the time when I looked behind me I saw a musher’s light in the distance. We mushed along at our StinkyPup pace and at around mile forty-six I started getting excited that nobody had passed us yet and we’d be at the checkpoint in two miles. Also at mile forty-six we passed an area to the left with a placard. I wasn’t able to read the sign, but there was a trail and it looked like it could have been a good spot for a checkpoint.

At mile fifty I began getting concerned. Did I miss the checkpoint? Could it have been at mile forty-six? I decided to try to use my brand new Zoleo satellite communication device to ask Greg if I missed the checkpoint. Unfortunately, the Zoleo’s battery died and I couldn’t contact Greg.

I debated what to do. I took into consideration that:

I turned the team around.

Turning a team on a tight trail isn’t the easiest thing to do, especially with Snowflake who is a dog who wants to eat all of her teammates. I put my hooks in the snow, tied my snub line to a tree, grabbed my leaders and hoped for the best.  I got the team turned around but my sled was at a weird angle. When I tried move the sled I got my foot pinned under the runner. This was a flashback to when I almost broke my leg when my foot was pinned under my tail dragger. I ended up wiggling my foot out of my boot and then un-pinning my boot.

I put my foot back in the boot, pulled the hooks and my quick-release, and we were off headed back where we came from. Around 1/4 of a mile in I saw lights and had a head on pass with three teams. I asked if I missed the checkpoint and someone said, they didn’t think so and they too were a bit confused about where the checkpoint should be.

I turned the team around again and we mushed back in the correct direction We pulled into the checkpoint soon after KL.  Turns out I was only around .5 miles from the checkpoint when I turned around the first time, and the checkpoint was right on the trail and impossible to miss!

At the checkpoint after parking the Stinkers, I took off any remaining booties, gave the dogs a snack, gave them straw, and started my cooker. Since it was fairly warm out and I had hot water in three GSI microlite 1000 bottles, I didn’t have to melt much snow and the was able to feed/soup the dogs fairly quickly.

Unfortunately, my hydration system failed and I was dehydrated and thirsty. I brought a 64oz HydroFlask and used the wide mouth flex sip lid. I shoved some tubing down the hole in the lid and put some silicon to seal the hole. I had tested it once at 28F/ -2.2C and it worked fine– but the trick is to keep sipping from the straw so it doesn’t freeze. My straw ended up freezing before I left the start because I didn’t remember to sip from it.  I was able to open up the HydroFlask and have a good drink.

While the dogs rested, I chatted with the other mushers and the folks at the checkpoint. There was a wall tent set up with a stove, as well as a fire outside.

Pretty soon it was time to snack the dogs, bootie up, and go. We stayed at the check point for around 4 hours and 26 minutes, and we left right after KL.

Checkpoint #1 to the Finish

Because it cooled down at bit, the run to the finish was a lot smoother and faster than the first leg. It seemed like we were flying– but I think we were still going our 7.3mph Stinky pace.

At some point we passed KL and our pass from behind was fine.  Around 10-15 (?) miles from the finish  we passed the twins. My first pass with LT was fine, but my second pass with LT was crappy. Amy-Sue got tangled in LT’s team. I hooked in and walked up to fix Amy and then Snowflake attacked Amy, and Justice wanted to join in, and then Snowflake jumped Yukon. Thankfully, Snowy didn’t bother anyone on LT’s team.

After sorting out the tangle, we were on our way.

Finally we dropped down onto Braeburn lake! After we exited the lake, the trail was amazing, as it was smooth and tree lined.  We had never been on this section of trail before.

We reached the finish line in third place!

The Stinkers and I would like to thank the race officials/organizers,  the amazing volunteers, the other mushers, and my super handler for making this a fantastic event.