Sunday night June 1 at 11:59pm I awoke to a very noisy dog yard. I looked out the window and saw a moose standing in the middle yard where Ahab, Spike, and Wayne live. I put on my Crocs and ran outside.  I opened the gate to let the three scared dogs run into the upper dog yard. I knew I had to get the moose out of the yard, but wasn’t sure how, so I texted Greg in Saudi Arabia.  He called and we agreed that I should open the fence to let the moose out. The moose wasn’t showing signs of aggression (he wasn’t stomping his feet, ears weren’t back, he wasn’t snorting– do moose snort?) He was around 15 feet away from me. I took a step forward and he charged me. I screamed and went flying. I think he hit me on the top of my head, but I don’t remember. He continued to run into one of the fences. I was curled in a ball on the ground– scared for my life, hoping that he wasn’t going to stomp me.  When he backed off, I stood up, found my glasses and phone and ran into the uptown dog yard. He decided to charged Red, who was in the downtown dog yard. I screamed again. I ran inside to put boots on since he had knocked off my shoes.  I noticed Monkey and Pumpkin were wandering in the street, so I grabbed them an put them into my car. I wasn’t sure how they had gotten out.  I then wandered to the outside of the fence where here was and opened the gate. He took a look a me, thought about charging me again, but just ran through the open gate and knocked down another part of the fence. During all of the excitement, Greg contacted Tami (my handler) and she came over to see if I was okay and to help put all of the loose dogs away. 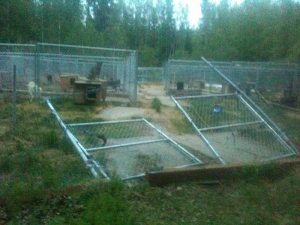 Turns out that the moose’s entry way was the downtown dog yard (that’s how Monkey and Punky got out). He knocked over the chain link gated fence. He then jumped out of the dog yard (trashing field fencing) and and then jumped back into the inner dog yard (trashing more fence.) When he charged me he trashed another section of fence and  then trashed the fence when he charged Red, and trashed the fence when he left the dog yard. 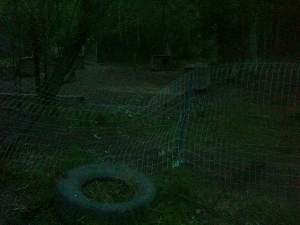 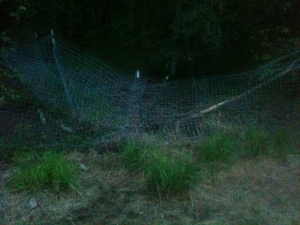 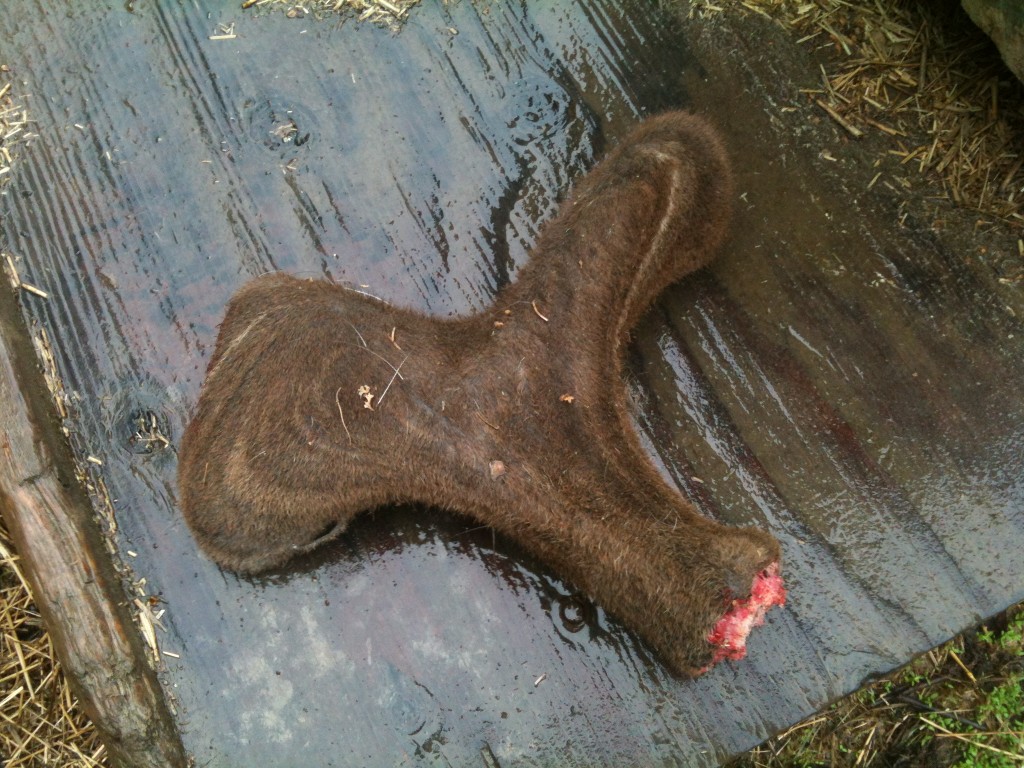 When my friend Mike came over to help put the fence back together, he found a velvet antler at the base of a tree.  It’s possible the moose was pissed off because he crashed into the fence and then a tree and lost his antler.  It’s also possible that it was a revenge moose.  Last year Nutok and Maude killed a baby moose. Perhaps this was the baby’s brother looking for revenge.

As far as injuries go, Mo managed to get a gash next to his eye; and Ilana is very sore– my head hurts all over, as well as my back and neck. It feels like I was in a car wreck.

One Reply to “Ilana Gets Charged by a Moose”