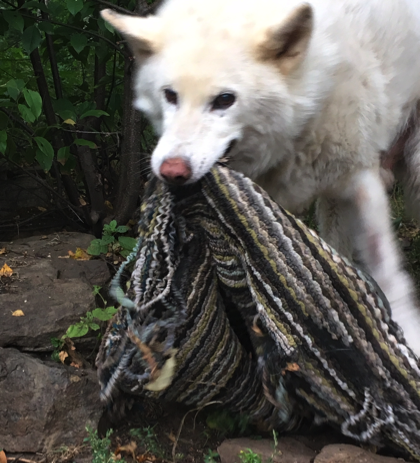 It’s with great sadness that I write that Danny (11.5 years old) has passed away. He was diagnosed with abdominal tumors in April 2019. We put him on prednisone to stimulate his appetite and codeine for pain. We knew eventually he’d crash– which he did on Dec. 4, 2019.  Several days before hand he wasn’t eating well, seemed lethargic in the mornings, and just didn’t seem happy.

On the morning of Dec. 4th he was extremely lethargic. Unfortunately, Greg was on his way to Toronto. After Greg and I decided “it was time” I made an appointment with the local vet. Danny was on the couch and refused to get up, so I wrapped him in a blanket and carried him.

Danny was a wonderful and comical dog.  My friend J. had rescued him from someone in Two Rivers, AK and she thought he’d be a good sled dog (ha!). Danny didn’t last very long in the dog yard because everyone kept picking on him, so he became an inside dog. As an insider, I did take him mushing, but he had such bad feet– even with booties on he’d get snowballs, so eventually I stopped taking him on “C” team runs (7 milers).

Danny’s favorite thing to do was to drag carpets outside, and his bestest friend (besides me) was Bruno.

RIP Danny, we love you!