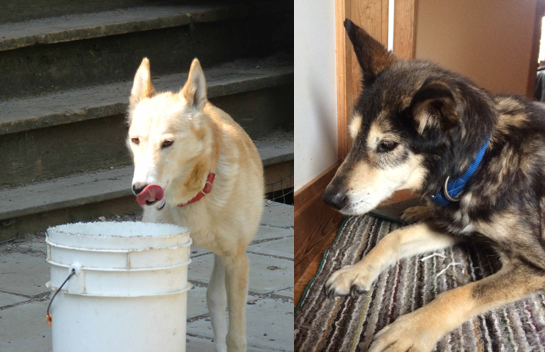 On July 28, 2016 we took a family trip to Dr. Ann’s to euthanize Nutok and Stubby.  Euthanizing my girls was one of the hardest decisions I ever had to make. The both were “alive” but their quality of life sucked. Nutok was around 18 years old and Stubby was 14 years old. Nutok was able to get around on her own, but often fell and barked to be rescued. Stubby was sort of able to get around on her own, but due to her bad leg, had much difficulty getting around– she was not able to use the dog door like Nutok was.  Neither of these girls ate very much and they were wasting away. I had to hand feed Stubby. It took around 45 minutes for the girls to eat a small portion of their meal. Nutok
We got Nutok in 2004 (?) when one of our neighbors left her in his yard and he left the state.  He told us someone was going to pick her up and bring her to a touring operation. That someone never picked her up, so we rescued her. Nutok was a lead dog, but didn’t like to run, so we didn’t run her. She lived in the dog yard until she got severely beat up by Monkey and Pumpkin– her arch enemies. Monkey, Pumpkin, and Nutok hated each other!! We brought Nutok inside in 2010 and she became a permanent inside StinkyPup pet dog.

Nutok wasn’t a needy dog. She was extremely smart and independent, and didn’t like to get pet very much. She was a loner and didn’t socialize much with the other dogs. She had a very deep bark and let us know when she needed help. In the last six months of her life, when she fell and couldn’t get up she barked for me to come and help her.

Nutok was a very good friend and we will miss her. Stubby
Stubby was one of the eight dogs that came with the purchase of our house in Alaska. Stubby was a fine little sled dog and pulled her heart out until she a) had an embolism in her leg and b) got attacked by 9 Akitas and had her leg basically ripped off.  She was fortunate that Dr. Flemme saved her leg, but she suffered from a limp and very bad arthritis. After the accident, Stubby became a very good inside dog.

Stubby had a lot of personality and was a cutie-patootie. She loved to eat things, food and non-food alike. In her later years, her stomach couldn’t handle all of the junk she ate and she ended up getting obstructive bowl surgery.

Stubby was an awesome sled dog and very good friend and we will miss her.