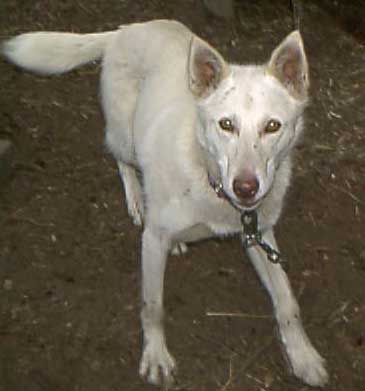 Storm had a tumor on her pancreas or spleen (we only had an x-ray done, not an ultrasound– so we’re not 100% sure which organ) which was most likely the cause of her having low blood sugar.  On the morning of May 8th I woke up at 6:00am and found Storm in what I called “a state”– which was a low blood sugar state. When she didn’t know who I was and was stumbling around– she was in a “state.”  This time, she didn’t know who I was and was laying in the mud room.  I tested her glucose level and it was 2.5 (4 is normal), so I gave her some Ensure by syringe.  I did this for around an hour and only got her glucose level up to 2.9 before I went back to bed at 7:00am.

When Greg got up Storm seemed normal, but then he yelled for me to come out. Storm was having a full-blown seizure.  Greg had never see a seizure and thought she was dying. I had witnessed seizures in humans when I was and EMT, so this was my guess as to what was going on. Low blood sugar levels cause seizures. It was very scary and traumatic. She was foaming at the mouth and shaking. It felt like lasted for 2 minutes, but I’m not sure.

I tested her blood sugar level and it was 3.4– which is high enough– so I didn’t know why she was having a seizure. Later on in the day our Barry’s Bay vet told us via a telephone call that seizures can raise blood sugar levels– so this is probably why it was 3.4.

I tried giving her some more Ensure and we put her in a crate to rest– the other dogs were interested in what was going on and we wanted to protect her.

An hour later she had another seizure, and then another and another and another. After having 5 seizures, I tried calling our local Faraday vet, but the answering machine picked up (it was Sunday and Mother’s Day) and referred us to Peterborough. I then tried our Barry’s Bay vet via her emergency number and left a message. Dr. A. called back within 10 minutes. She recommended giving Storm 4 Benadryl (diphenhydramine) to knock her out. Valium would have been better– but we didn’t have any. She also recommended giving Storm a Rimadyl…but since I just started her on Prednisone, we didn’t give her the Rimadyl. You can’t give Rimadyl with Pred.

The Benadryl didn’t work. More seizures. We decided it was time and called the vet in Peterborough. We drove the hour and a half drive, arrived at around 4:00pm, and had the vet euthanize Storm. She must have had 11 seizures since 6:00am.

Stormy was a lovey dog. We got her from the Fairbanks North Star Borough pound in around 2005. Apparently, her people were leaving Alaska and couldn’t take her. I remember seeing her on the chain in the dog yard at the pound. She was jumping up to hug me. We adopted her and Sugar that day.

Storm lived in the dog yard and was a lead dog for several years, and ran a couple of 100 mile races in Two Rivers. Unfortunately, she had a couple of snowmachine incidents where she was grazed by snowmachines. After the second time it happened, she didn’t want to lead anymore– which is understandable.

She also was a skijour dog. I don’t skijour a lot, but the few times I went, I went with Storm.

Storm moved inside in around the Summer of 2009.  She was a very affectionate dog. She liked to be pet, but then would growl/purr at you like a cat.

Storm was a special dog and will be missed, and always loved.