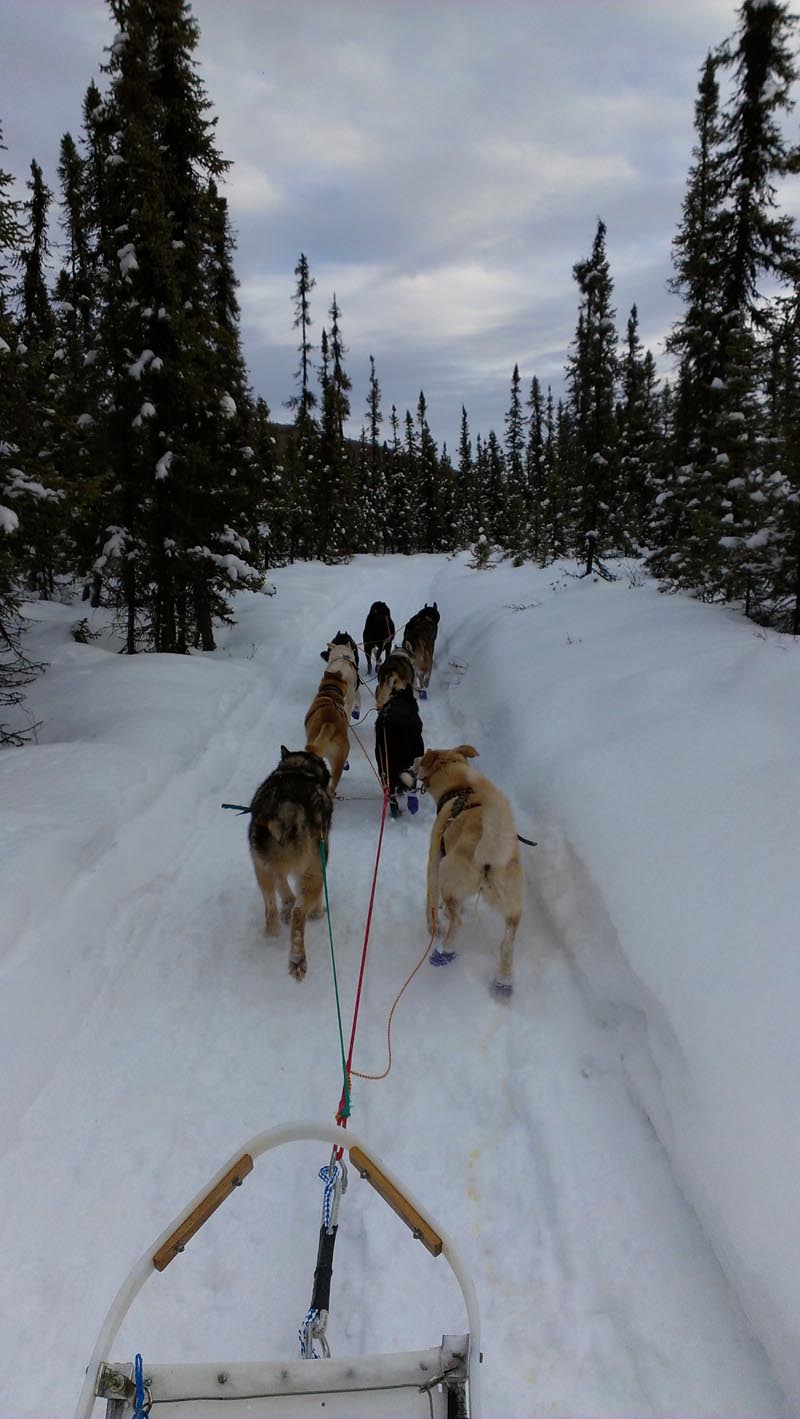 I’ve been out running almost every day, however with Greg out of town and the warm fall we had, it’s difficult to get all of the miles I need to enter a race, so I guess I have to face up to the fact that I won’t be running the Gin Gin this year :(

Here’s the run down on the Stinkers who run:

Nikki is my #1 super-dooper champion gee/haw lead dog, but she’s 11 years old and has slowed down a bit.  I took her out for a 18 mile run the other day and she seemed tired. It could have been it was her first long run, or it could have been she’s 11 years old.  The only thing Nikki doesn’t know how to do is poop and run. I need to stop for her when she has to poop. I love Nikki so much, but I don’t think she can be on the “A” team this year. She’ll be running on the “B” team.

Wayne is my crazy line-eating, harness escaping, 6 year old leader. The only reason Wayne runs in lead is because he’s a terror anywhere else. He seems to be catching on to the gee/haw thing, but I wouldn’t count on him alone. Like Nikki, Wayne doesn’t know how to poop and run. Wayne is on the “A” team.

Dru seems to be a good leader.  She’s on the older side at 8 years of age. This is the first season I’m running her, so I’m still discovering what she can do. Dru is on the “A” team.

Moe is turning out to be a reliable point dog, except he doesn’t want to poop and run. He thinks just because I stop for Nikki and Wayne, I should stop for him. Moe is 6 years old and is on the “A” team.

Spike is a reliable girl who likes to run on the right side. I usually run her in wheel or one up from wheel.  I’m a little concerned about her hips because sometimes she has a funny gait and she’s 9 years old. Spike is on the “A” team.

Stella is a 5 year old girl who supposedly runs lead, however she doesn’t for me so I run her in point. Stella is a reliable girl and is on the “A” team.

Recluse is a 9 year old male powerhouse. Recluse is an awesome wheel dog, a magnificent beast, and a good eater. Recluse is most certainly on the “A” team.

Bear is a 5 year old male who is a picky eater.  He doesn’t like to eat after a run. I brought Bear to the vet earlier in the season because he had a strange arch to his back. The vet thought he was tight in his back and that massage and heat would help. He has a strange gait. For now Bear is on the “A” team— but I’m not sure how long that will last.

Maya is a 5 year old princess who belongs in the house. I humor myself by running her, but she likes to dip (eat snow while she runs) and tires quickly when it’s warm out. Maya is on the “C” team.

Simba is a 10 year old male who is very strong, tall, and lopes inappropriately. Due to his inappropriate lope he usually injures himself early on in the season. Right now he’s running 11 mile runs and I probably won’t have him run more. Simba is on the “C’ team.

Rattles is a 10 year old male and Simba’s kennel mate. Like Simba he’s very strong. I usually run them next to each other in wheel or one up from wheel. Rattles got his foot caught in a trap years ago, and thus his career as a mid-distance dog ended. Rat is on the “C’ team.

Phanty is a 6 year old male with curly and hard to clip toe-nails. Phanty has never finished a race longer than 50 miles. He’s doing okay this year– but I haven’t been training seriously. Phanty is on the “B” team.

Zeus is an 8 year old male who runs hard and then slacks off.  Last year Zeus collapsed 2 miles from the finish line of a 300 mile race (the Copper Basin), so I’m a little concerned he’ll collapse on our short runs. For now he’s on the “B” team.

Capella is a reliable 9 year old girl. She’s a steady runner but is on the slow side. Bella is on the “B” team.

Lasher is a 7 year old male who I recently inherited. He’s strong, likes to run, can run in lead, but my vet told me I shouldn’t run him because his elbows stick out and his feet are flat. I’ve been running him anyway because he likes to go; however due to his picky eating he’s lost A LOT of weight and I don’t consider him “A” team material because of his poor eating habits. Lasher can be in the “C” team.

Shrek is a 7 year old male who is somewhat reliable. He has a bad habit of puking and fainting 10 miles into a race, so I always worry about him. In the beginning of the season he said he didn’t want to run, but I think that’s because it was too warm. He seems to want to go now. For now, Shrek is on the “A” team.

Kraken is a 2 year old teenager boy who just doesn’t realize that he can’t be on the A or B team. Kraken has irritable bowel disease and thus he has chronic diarrhea.  He loves to go for a run, but his line is loose and he can’t keep up. I’ll run him on 11 milers, but that’s about it. Kraken is on the “C” team.

Cozzy is a 6 year old big furry boy who can’t run due to his alligator behavior. He’s not on any team!

Siren is a a 2 year old super star! She’s a little mini thing that LOVES to run run run. Siren is on the “A” team.

Medusa is Siren & Kraken’s sister. She’s doing a lot better this year than last year, however I haven’t been running long miles. She likes to chew the line and unharness herself.  Medusa’s on the “A” team for now.

Maude is a house dog who is back on the team! Maude injured herself during the 2012 Gin Gin and has been inside since 2012. She pulls like a m***f**** so I put her back on the team. She’s doing well, but doesn’t have as many miles as everyone else. Like her brother Wayne, she chews the line, so I need to watch her during hookup and when I stop on the trail.  Maude is on the “A” team for now!