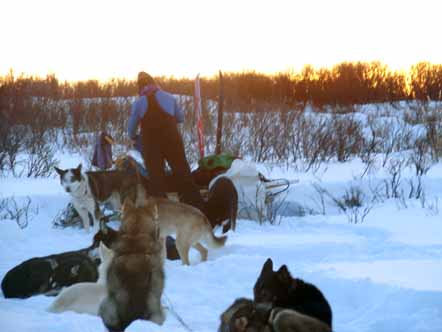 This years trip to Denali (Denali 2009 – Map), like last years, was short and met with some difficulty. We left our house at 3:30pm Friday, March 20th and arrived at the park headquarters until 6:30pm. Just when we were ready to start mushing, Sam decided to deharness herself and took off. We waited around until Sam returned to the dog truck, and left the park headquarters in the dark. We probably traveled around a mile or two and then stopped. The dogs still had ya-yas, but it was late and we found a nice camping area that was protected from the wind. By the time we were done with dog care (melting snow for water, feeding) and human care (melting snow for water, feeding) it was 3:00am! The temperature was around -20F. Chester, Sam, and Bruno slept in the tent with us. Our sleep was interrupted by the constant whining of Sam and Bruno.

The next day (March 21) we got up late, and eventually left camp at around 1pm. We were following the trail that had  started at the park headquarters. Since this year was such a big snow year, the bad section of overflow and glare ice (around 1 mile after park headquarters), wasn’t bad at all. Soon the trail petered out and we were following a ski trail. The snow was very deep, so I put on my snow shoes and broke trail, then ran back and mushed with my snow shoes still on. Repeat process.

Unfortunately, the ski trail we were following let us to the park road and the road had just been plowed. It snowed a little bit the night before, so the road had some snow cover on it. We cruised down the road to the Savage River camp site. We stopped to set up camp (around 4:00pm), and it took us a long time to melt snow and take care of dogs– but at least this time we were able to do chores in the daylight. We kept Sam and Bruno, with the rest of the dogs, on tie-outs and let Chester and Storm free. Storm was very needy.

After a night of endless whining from Bruno, we woke up at around 9am and began morning chores. After chores, we scouted a possible route back to headquarters that would have led us through Jenny Creek. There was a lot of open water on the creek, as well as no-snow spots, and we didn’t see a definitive trail, so we decided to head back the same way we came out. We saw HUGE wolf tracks and tons of fresh wolf scat; HUGE bunny tracks; and a big fat bird that was waiting for us to leave camp.

We probably left camp around 2pm and were quite bummed to see that the road had been plowed again– and this time it was plowed to the asphalt. We mushed for around 1/4 mile on the road (Yuk) and eventually got back to sections of the road that had some snow. We found the turn off for the ski trail, and with a little maneuvering got the teams to make the turn. The rest of the mush home was uneventful.

We brought 21 pulling dogs and one fun dog (Chester).

Trip Planning
Since I was traumatized by Spot being killed, Greg was in charge of packing and trip planning. I don’t know the exact amounts of what he brought– but it was a lot of food. For dog food he brought two 40lb bags of kibble, a block of turkey skins, Champagne race meat, energy pack, 42 pieces of big fish, some left over snacks from the Serum run (which Peetie, Sam, Bruno, and Chester stole from my sled) and some fat. We came back with most of the turkey, race meat, energy back, and 30lbs of kibble).