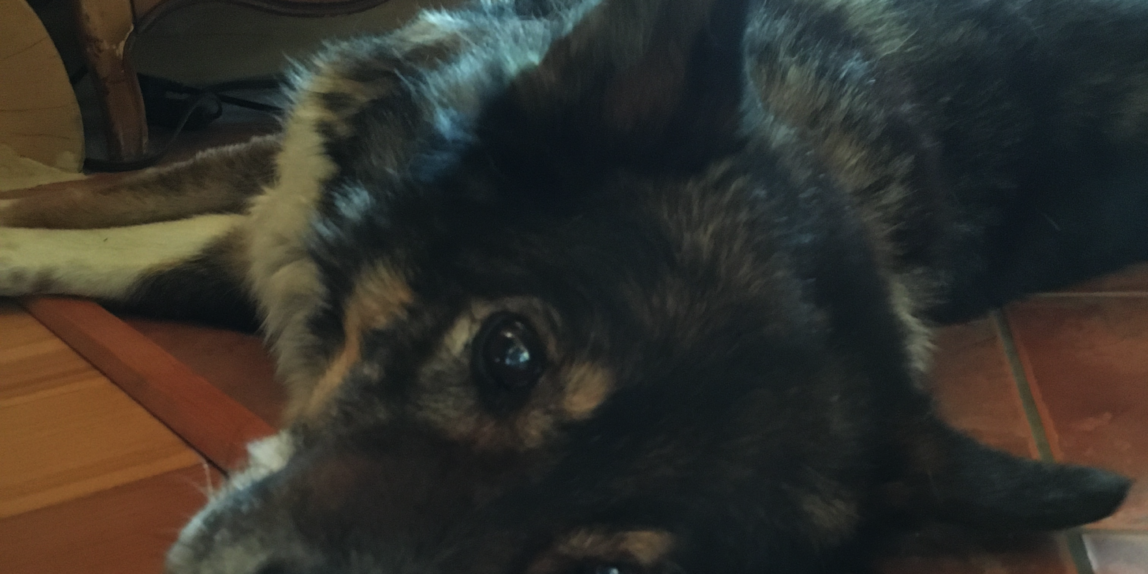 The big news is that Cozzy is still with us! Over a month ago (Sept. 27), Cozzy’s health was rapidly declining. He had bad diarrhea, was eating off-and-on, and had episodes of not wanting to get up all day.

The vet first prescribed Tylan. This worked for less than a week. His diarrhea cleared up for around three days and then was back.

Cozzy had a really bad weekend (Oct. 16th)– which consisted of not getting up at all and stumbling around when I stood him up. We were ready to euthanize him, as I  thought perhaps he had a hemangiosarcoma. After speaking to the vet, we decided to try a round of prednisone. We started Cozzy at five 5mg tabs once a day.  This helped! We then knocked it down to four tabs, then three, back up to four, and now he is getting two 5mg tabs once a day.

He has a good appetite, is part of the family, and no diarrhea!

Oct. 4th Maya visited the vet due to hair loss on her side. I thought it was summer allergies, but summer had disappeared and she was still losing hair. Turns out she had a bacterial infection. She was put on a dose of cephalexin for 14 days, and this cleared things up.

Medusa needed to go to the vet so that I could refill her Metacam prescription. The vet confirmed that her hip dysplasia is very bad, so we started her on Cartrophen.  Her kidney levels were in the “gray” area, so I’ve been trying to catch Medusa pee– which is not an easy thing to do.

15yo Zeus had a bad day on Dec. 7th. He didn’t eat– which is unusual for him, he collapsed twice, and his temperature was 103.9. I took him to the vet– who was stumped by his very fast heart rate and pretty normal bloodwork. After spending a lot of money on ultrasound and X-ray, she found that he had a urinary tract infection. He is on a round of Amoxi-Clav for 10 days. Zeus is a horrible pill taker! He will not eat the pill in his food or pill pocket and he SCREAMS when I shove the pill down his throat.

I brought Wayne to the vet over the summer because he was acting funny (I think he just gets too hot) and he has a tumor or cyst in his iris. The vet confirmed that yes, there is a tumor or cyst in his eye, and recommended taking him to an ophthalmologist to find out what it is.  I was going to bring him to Fairbanks, but ended up canceling my appointment due the expense of traveling to Fairbanks (including the $300 COVID test).

Everyone else is doing well.  The outsiders are a bit chunky for working dogs. We’re always adjusting how much food they get. I think I’m underfeeding them– but I’m not.