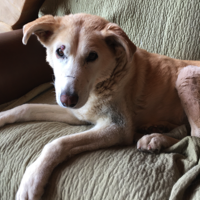 On August 7, 2021 we drove into town with Spike to say goodbye. At just about 16, Spike was no longer enjoying things and was having a poor quality of life.

Spike was an incredibly awesome sled dog and wonderful friend of mine. We adopted Spike Aug. 16, 2008 from one of our neighbors who was leaving Fairbanks. Spike was a good fit with our kennel because she was originally a Second Change League dog.

Spike was a super tough girlie, and in her youth loved to fight. Everyone always asked us about the scar on her snout, which was most likely from one of her many fights with Monkey-tail. She had used up her vet credits and we decided to let it heal on its own instead of getting stitched up– just kidding, sort of. Spike had to been the vet and got stitched up, but her stitches opened up, so we let it heal.

Spike usually ran in wheel with her friend Luke.

Spike was the last of of Serum Run 2009 dogs, and is running free with the rest of her team.

When Spike retired and came inside, in August 2016 and enjoyed living inside and snuggling on the couch.

RIP Spike, we will always love you.