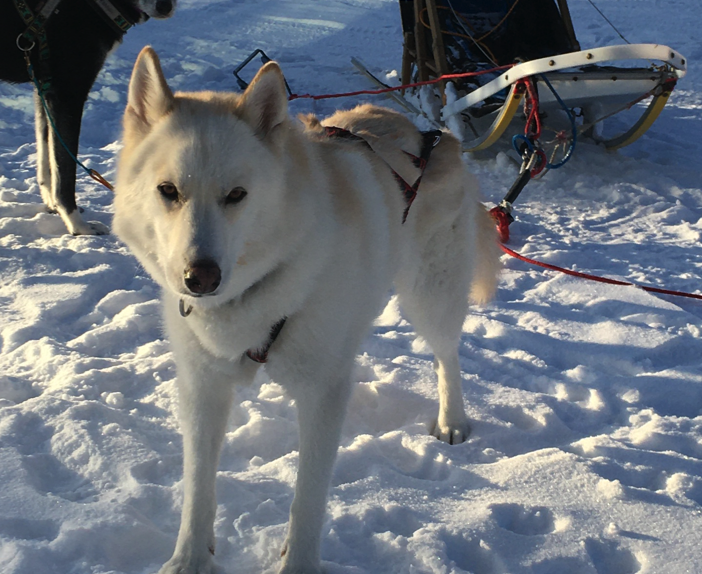 The last time Ilana had a moose encounter was in Fairbanks when she was charged by an angry adolescent moose in the dog yard. In L’Amable, Ilana never did see a moose, but Greg encountered a moose while jogging the trails in the spring.  Since we’ve been in Whitehorse, we haven’t seen any moose– that is until today. We have seen caribou, fox, wolf tracks, porcupine, and huge crows.

Ilana was out with team #1 [Allie, Axel, Ted, Kraken, & Moose (the dog)] on our one-and-only mushing route on a beautiful sunny day at -11F/-23C.  The team skirted out of our trail through the woods and onto a field and there they were– Mamma and calf.  One of the advantages of running with super small teams is they are relatively easy to handle during such encounters. I stopped the team. The dogs were going bonkers. Mamma and baby were running away from us– which is a good thing.  I’m a little timid around moose due to being charged by one, so the first thing that came to mind was “Is this the day we’re going to get stomped? ”  In Fairbanks, Greg had a pretty significant double moose encounter and thankfully did not get stomped. Maude and Nutok had a great day once as they killed a baby moose and brought its head into our house via the dog door.

The field we were on is totally flat and surrounded by hills, which turn into mountains. I saw baby moose run up a hill. Mamma followed, but fell– the snow is deep and the hill is steep. She looked at me. Dogs were still going bonkers. I waited a few minutes for her to regroup, stand up, and make it up the hill. Whew!  We were in the clear and could continue on– my other option was to turn the team around, which is relative easy to do with such a small team. The dogs were flying on the windswept and punchy trail. Even Ted, our designated SLOWberian was cruising– in fact, he was the most excited dog on the team.

We did our loop around the field, went back up through the wooded trail, past our house (where Ted usually balks and wants to stop– but this time he had so much energy he continued on without a word), down the road, and turned down a short hill making our way to another field. I thought “What are the chances of us running into any more moose?” We made a left (haw) on the grazing field and in the distance– what did I see?– another moose!? The dogs didn’t see it, but I was pretty sure it was a moose. I stopped the team and looked. It wasn’t moving– so I began to approach. I really wanted to continue onward, but if there was a moose, I would need to turn the team around. Finally, there was movement. This moose was much bigger than the other two we just saw. Yup, time to turn the team around. The dogs now knew something was up– especially Moose the dog who wanted to say hello to moose the BIG moose. I successfully turned the team around in deep snow, and we mushed on home with no additional encounters.

When I went out with team #2, I avoided both fields!