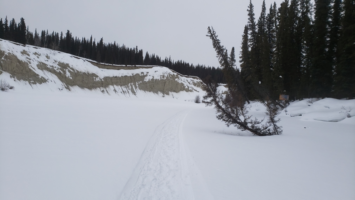 For our first season in the Yukon, Greg and Ilana have been participating in the Yukon Brewing Copper Haul League sponsored by Jon & Debbie’s Skywolf K9 Adventures Dogsled Tours. The 10 mile race happens at the Copper Haul trail starting at Fish Lake road.

The race included a handicap scoring system with points. To be entered in the final chance to win a trophy and cash, mushers needed to attend all four monthly races and get the most points. Greg was all set to win the trophy/cash, as he was in last place; but due to a scheduling conflict with a local marathon  on March 13, 2021, Greg skipped the mushing event and opted to run the marathon [temps ranged from -3F/-14.4C to 7F/-13.8C].  Ilana took the strongest team– we’ll sort of (we can’t run Geri/Allie & Axel on the same team because the girls don’t get along) and ran with Allie & Axel (lead), Jack & Chaos (point), Timber & Yukon (wheel).  We ran our best time of the season, 58m 43s and ended up being the League champions for the season !

Greg had a great time running in the cold temps completed 26.4miles in around 5.5 hours. There was a lot of soft snow.

As I write this on March 21, 2021 there is still snow on the ground and it’s even snowing a little bit. This Stinker is thankful for a long winter season!