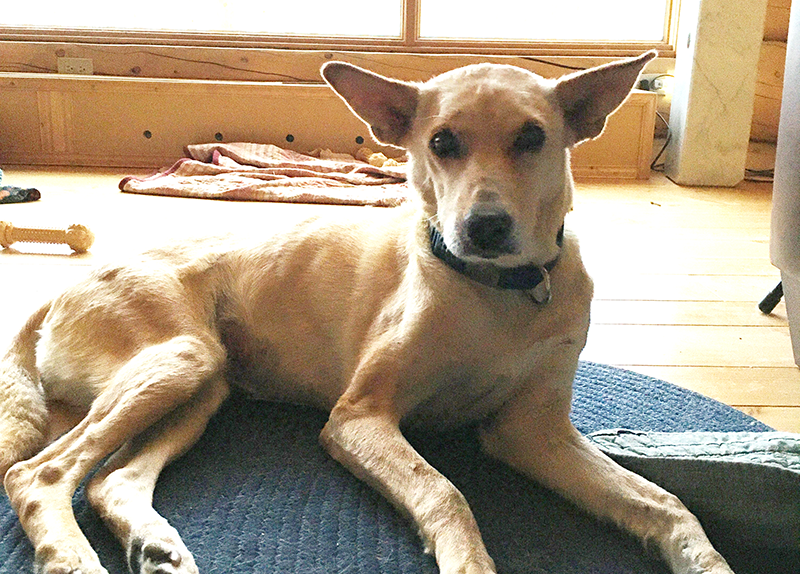 We had quite the scare a little over a week ago. Myra is very skinny, so I decided to give her an evening treat of some crappy food call Rollover. Almost immediately after she ate this treat, she began coughing and stumbling around the house. She vomited up the food, which Kraken ate, and then vomited some more and stumbled some more. She was panting, her gums were red, and she had a pulse of 130. We thought she may have bloat.

It was 7:30pm on a Friday night and after an hour of this we decided to call the vet. Of course, as soon as I began talking to the vet she started drinking water and looking better. The vet thought she had an acute pancreatitis attack due to the high fat content of Rollover. He recommended keeping her off food for 24 hours and then when feeding her again, feed her a small meal of rice and chicken (something bland).

The trip from Ontario to Whitehorse was very hard on Myra, and she visited the vet on Nov. 13th to get a check up. The vet took her off meloxicam and put her on prednisone and gabapentin. We weened her off the prednisone, but then she tried to go down the steps, and probably fell, and wasn’t feeling well again. We put her back on the prednisone, but at a lower dose. She seems to be feeling much better on the prednisone. We’ll talk to the vet next week to see where to go from here.