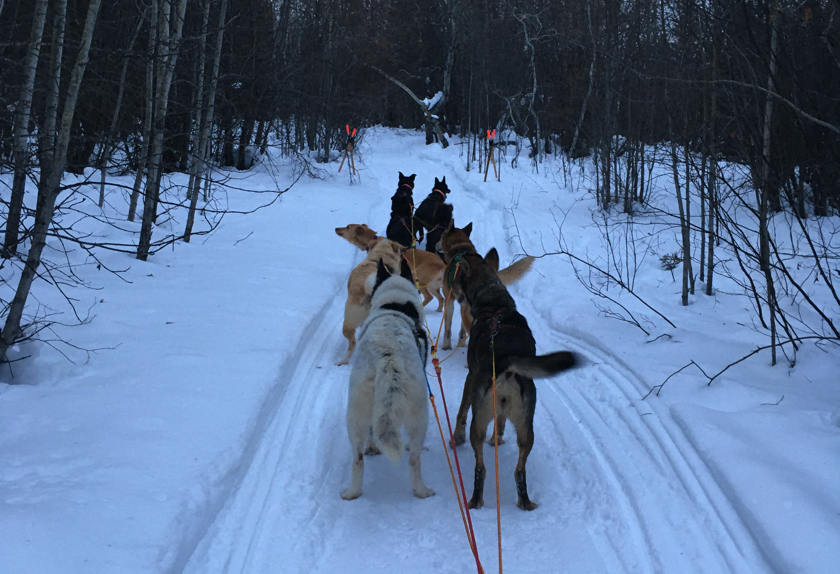 With above freezing temperatures, the Stinkers had a break from running for almost one week! This put a damper on our training. It was between 34-40 degrees Fahrenheit (1.1-4.4 Celsius), so we needed to stay off the trails so they didn’t get totally trashed.

On Jan. 29th, Greg and I saddled up my Yukon Quest 100 team (Allie, Axel, Geri, Amy-Sue, Justice, Snowflake, Timber, Yukon, and Kia) and drove to Takhini River Road in search of the Dawson Overland Trail.  The plan was for Greg to drop me off and meet me 13.5 hours later at Braeburn.  This sixty mile leg of the trail will be the same trail I’ll be running for the Yukon Quest 100, so I wanted the dogs (and myself) get familiar with the trail.

At 4:00pm, after packing up the sled and hooking up the dogs we were ready to go! Allie and Axel were in lead and weren’t sure which trail to start on, and tipped my sled– which resulted in my cooler spilling. I didn’t know it then but around 1/2 of my dog soup spilled out. Greg helped them go straight and off we went!

The trail was AMAZING. The temperature was around 18F/-7.7C and we glided along the trail. We had several snowmachine encounters and OMG– I love how the people on sleds actually pull over for dog teams and wait for them to pass. This never happened in L’Amable (in fact we intentionally didn’t go mushing on the weekends due to snowmachine traffic); in Fairbanks drivers were generally polite, but not always.

We encountered some overflow and glare ice and I was glad that I didn’t bootie the dogs. When dogs have booties on and run through overflow, you have to stop and take the booties off so that they don’t freeze to their feet.

We encountered the Rangers who were fixing the overflow sections, as well as some more snowmachiners. The trail was sparsely marked with blue and orange markers for the upcoming Montane Yukon Arctic Ultra— which Greg is running this week!

After two hours, I needed to put booties on Justice, and then began snacking the dogs every hour. My first snack was chicken, which was sitting on top of the cooler and thus turned into chicken sludge. Lesson #1— don’t put meat on top of your cooler.

At 8:00pm and 31 miles into the run we spotted a cabin and stopped to check it out. We missed the first left turn, and took the second turn in– thus we were facing south and we wanted to be facing north. Lesson #2— always stop in the direction you want to be traveling.

It looked like a small dog team had camped there because there was straw and kibble on the ground, so I decided this was the place to camp. The dogs were not ready to camp, and have little or no camping experience. I souped them with what soup was left, gave them fish snacks, put down straw, and took off Justice’s booties. I needed to tie Allie and Axel to a tree because they kept getting tangled with Geri and Amy-Sue. Traditionally, Allie and Axel do not like Geri, and visa versa.

Amy-Sue settled right in. She knows how to camp. Eventually, Timber, Yukon, Geri, Justice, Snowflake, and Kia settled– somewhat. Allie and Axel just sat there wondering WTF is going on?

I took a peak in the cabin, but wasn’t sure if I was allowed to stay in it, so I tried to rest in my sled. It was only 8:30pm, so I was pretty awake. I guess I’m a bad camper too. I practiced lighting my cooker. It worked. I tried to rest in the sled. I texted Greg on our rented inReach that we were camping. Two hours into resting the dogs were awake and ready to go! I promised myself  that I’d camp for four hours– so turned my light out and tried to get the dogs to settle Snowflake was chewing on the brand new gangline. Kia and Yukon were playing puppy games. Justice, Allie, Axel, and Geri were sitting up. Timber sat next to me asking to be pet. Amy-Sue was the only dog that was resting. The plan was to leave at midnight. At around 11:00pm, I said to myself gee- I don’t think the dogs have had enough water. I fired up the cooker and melted snow and made them some meat soup. Everyone drank it up except for Allie and Axel– who just wanted the meat and not the soup. At 11:30pm I packed up the sled and started booting everyone. I bootied Timber first and by the time I was done he had taken his front booties off and didn’t want me putting them back on– so I said fine.

The trick was going to be getting Allie and Axel to go down the hill from the cabin and turn left (haw) onto the trail. Note, there was a trail. Ready, Let’s Go! We were off. The next thing I new was that were were in thigh deep snow. Instead of taking the trail, Allie and Axel decided they wanted to visit the picnic table. Huh? Why? I needed to turn them around and was in deep snow. My concern was a dog fight– which happened when I turned the team around during Carbon Hills race.

While turning them around, Allie’s collar fell off and everyone was tangled. No fight though! My other concern was losing my team. Since we were on a downhill slope, and Amy-Sue loves to pop the hook, I was really worried. I ended up unclipping necklines and working as fast as I could to get the team going. Of course Allie and Axel wanted to turn right instead of left, and finally I got them to turn left and Kia slammed into a tree. She was fine– just startled. I got the team facing the right direction, attached neck lines,  and off we went!

There were NO markers. After the Montane checkpoint there were no markers and lots of offshoot trails. Allie and Axel aren’t the most experienced leaders, so I was concerned about which trails they were taking. Occasionally I would see an Dawson Overland Trail marker and/or a green arrow– but these were sparse. There was one intersection where I was positive they took a wrong turn. I took out my compass to make sure I was headed North.

We ran for 1hour and 30 min and then I stopped to snack them. This was when I noticed my Spot tracker had died– it was low on batteries and I didn’t bring an extra set. Lesson #3– Don’t assume the batteries in your device are fully charged. Bring extra!

We kept up our StinkyPup pace and eventually heard Greg on the radio (we have  handheld radios with a distance of up to 2 miles). I was so happy to hear his voice! This meant we were close and were on the right trail. Eventually (around 4:00am) we bopped down the steep hill onto Braeburn lake.  Ut Oh. Where to now? It was snowy and windy. I knew I had to go Northeast, but there were so many trails on the lake and I had no idea where to go and didn’t want to end up in someone’s yard. We did a loop on the lake and then saw Greg, Floppy, and Moose. Allie and Axel still wanted to go in circles, but eventually we ended up behind Greg and the boys (Greg was pulling his pulk) and exited the lake, and went up the hill to the dog truck.

The dogs were looking good and ready to continue on, but they were happy to be at the truck. We souped them, packed up, and headed home.

Overall it was a super successful 60 mile trip and I’m feeling a bit more confident about our upcoming race.