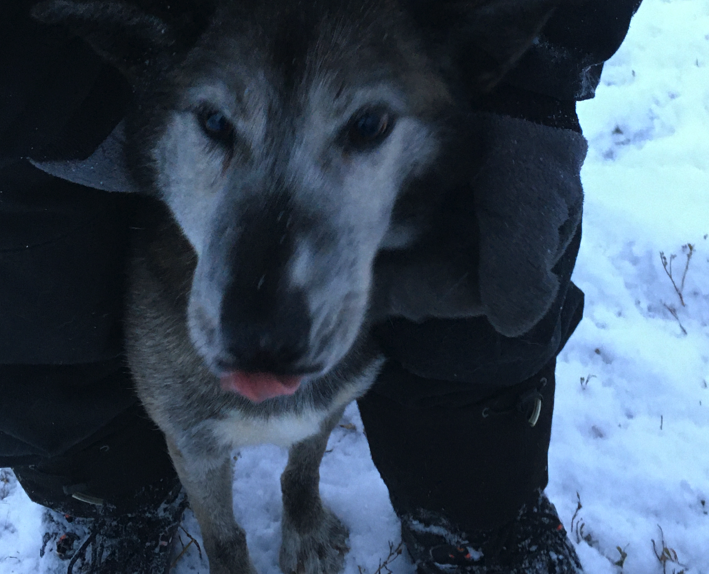 Of course– with my recent bout of bad luck, it was snowing and we don’t yet have snow tires on the Subaru or Tundra, and our road is challenging to drive on, especially with all of the downed trees from the wind storm. I left StinkyPup Palace at around 9:20 and arrived at the vet’s office one hour later.

I waited around an hour before someone came out to get Chaos. At 12:30pm I texted to get an update, and he hadn’t been seen yet, so I was going to drive home and come back for him later– but my car battery was dead. Ack!  I sat the car for a while pondering what to do. Finally, I left the car to look for an auto store and there was one right next door! The wonderful guy at the Auto Body shop on Copper Rd. came to the rescue with a portable jump start kit. After the car started, I filled it up with gas, and due to the slick hill at the gas station I almost skidded into an oncoming truck. I was not having a good day :(

Finally, the vet called at around 1pm asking for permission to sedate Chaos because he was too squirmy. Then around 2pm she called and said that she didn’t see anything that would have caused the abscess– but his cheek was filled with pus and was painful. At around 3pm he was released and was given a shot of Metacam and a bottle of Amoxi-Clav.  The swelling had gone down because the abscess was drained, but it’s filled up again. The vet said to give him 48 hours to see if there is improvement, and it’s been just over 24, so I’ll try to be patient.