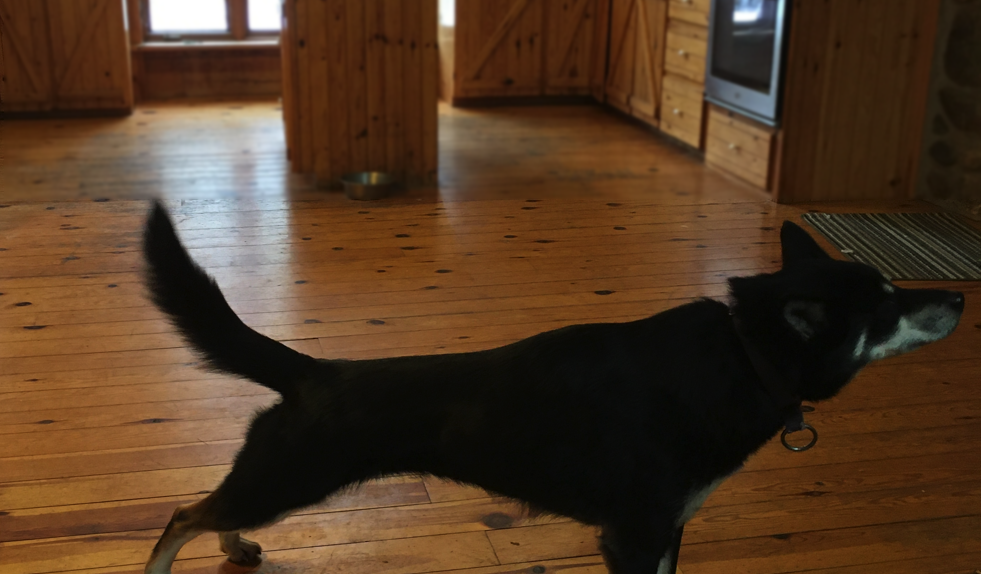 Medusa has passed her trial period and is officially an inside dog!

Medusa was not eating well and we decided to try to move her inside. She and her sissy are quite bonded, and the last time Medusa was inside (due to having an eye tag removed) she and her sister Siren whined for each other. So at 2:00am I trotted down to the dog yard to bring Siren inside.

Medusa, a Forsberg/Mackey dog,  was diagnosed with hip dysplasia in Jan. 2018– and thus her mushing career ended. We wanted to bring her inside, but she was so bonded with her sister that we decided not to, until now.

In Nov. 2019 we brought her to the local vet due to her not eating. Her blood work showed high liver values, so we took her off of meloxicam (which we were giving her for the hip dysplasia). We put her on Pepcid and Sucralfate, and eventually (2-3 weeks later) she started eating well. We’ll need to have blood work redone in around a month, as we’ve put her on Zentonil, a liver supplement.

Since Medusa’s been in, she’s mildly destructive. I can’t prove it, but I think she is guilty of destroying my glasses and recovery sandals. I had put these items next to my head while I napped. When I woke up they were outside. Siren misses Medusa more than Medusa misses Siren. For a while we were putting Medusa in the dog yard to say “hello” to her sissy while we take Spike, Floppy, and Moose out for their dinner time walk, but now Medusa won’t even come near the gate when it’s walkies time.

Siren is a champion sled dog, so has a couple of more years out there in the dog yard until she is reunited with her sissy Medusa.