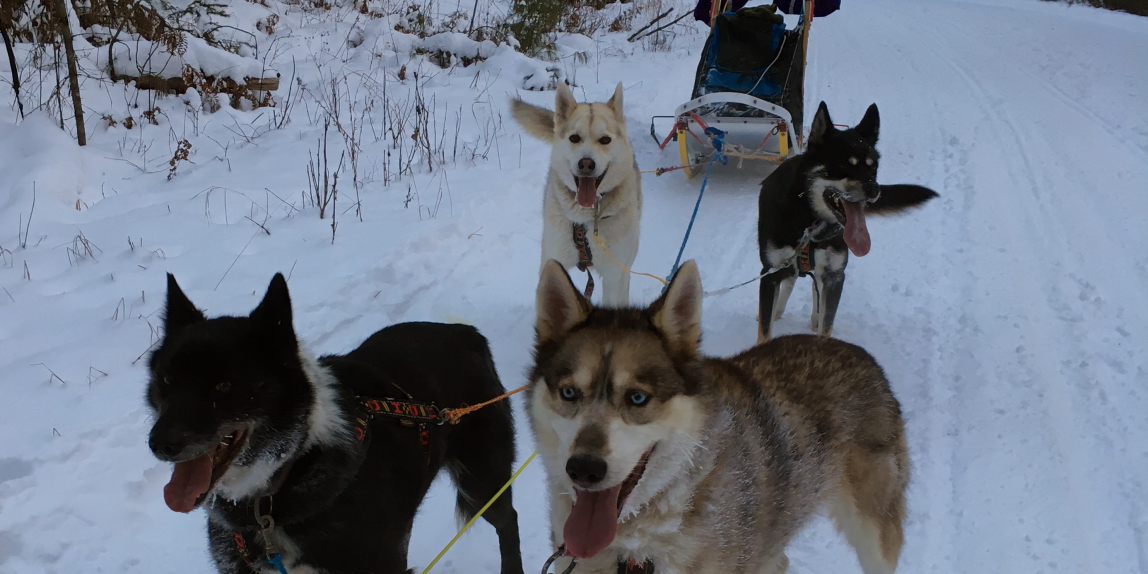 With the Stinkers recovering from the porcupine incident, it’s slim pickings for leaders. Stella and Phanty, our leaders this year, are still recovering. We’ve tried putting Wayne and Siren in lead, but they don’t know their gees (turn right) and haws (turn left), so we’ve ended up doing a short 2 mile loop– which they are familiar with.

Tonight, instead of Greg and I going out together taking a team of 10 dogs (which is difficult to stop on roads), I went on a solo run and took six dogs:

When we got to the section of the road where the dogs needed to “gee” they wouldn’t do it. Probably because there isn’t a trail there– there’s just a snow bank they need to hop over.

After telling them gee, gee, gee, gee, gee for a few minutes, they pulled me haw– the way they’ve been going. Once we got off the road, I was able to stop them and turn them around. The snow isn’t deep enough to hold a hook for a long period of time, but it was long enough for me to hook down and wrap my quick release cable around a tree and turn the team around. After turning them around, off we went– the correct way, and we all enjoyed a 7 mile mush.

I noticed the porcupine had been moved; and when we got to the porcupine section of the trail, Siren and Ted were quite interested in the smell and the snow where the incident occurred.

2 Replies to “Success! Well Sort of.”