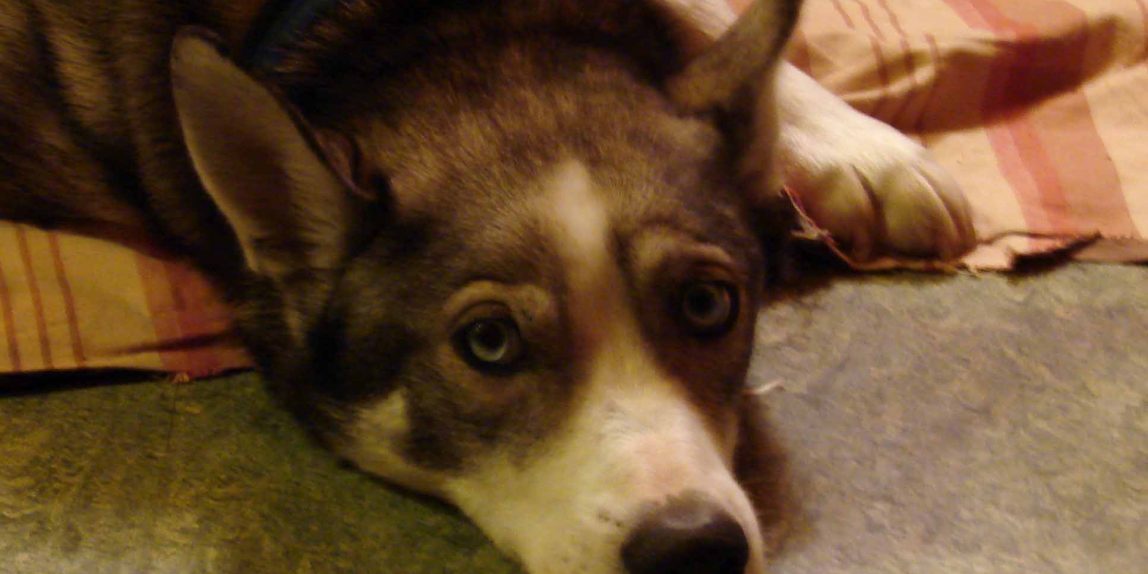 Friday night Frankie was fine. He went on a walk, ate dinner, and perhaps he was just a tad more cranky than usual. Saturday morning he couldn’t stand up. He didn’t want to go on a walk, he was hunched over, yelped when I tried to stand him up, and didn’t want to eat. Stinkypup diagnosis: either he has something wrong with his back or has an obstructed bowel.

We brought him to the vet with his sister Stubby. Ex-rays showed he had some type of foreign body in his stomach, but it didn’t look like an obstruction. This is the first time ever that we actually saw something in an ex-ray of a dogs’ stomach. Normally an ex-ray is taken and then we hear, “we’ll the ex-ray is inconclusive.” This time we saw the little chunks of whatever just hanging out in his stomach. The vet surmised that it was either pieces of bone or plastic. The doc also noted arthritis in his back.

She gave him a shot of buprenorphine for pain and recommended tramadol if he appeared painful in the upcoming days. She also gave us Cerenia (I’ve never heard of this before), which is an anti-nausea drug for dogs. We switched his food temporarily to Hills w/d and are giving him some canned pumpkin with his canned food.

He showed immediate improvement the next day, however, he still seems a little glum. With 11 dogs living inside, it’s difficult to determine who’s poop is who’s (no– they don’t poop in the house, we have a dog door and they poop outside, usually); and we haven’t identified any foreign objects in any poop, so we aren’t sure if whatever is in his tummy has actually passed.

Stubby also visited the vet. Stubby has been randomly yelping and we can’t figure out where the pain is coming from. The vet couldn’t figure it out either and recommended we continue to give her rimadyl and not take her on walks. She thought it was possible neck pain. The morning after her vet visit, Stubby woke up in a lot of pain and jumped on the bed where she tensed her entire body and shook for a couple of minutes. We’ll give her another week and if she’s still exhibiting the same symptoms we’ll bring her back in. Stinkypup diagnosis is she has an abscess we can’t see, or she’s having arthritic pain.

Update June 10 (Greg): He’s feeling better. Maybe it was all a ploy to get canned food for a week. There was no sign of what was stuck in his gut.