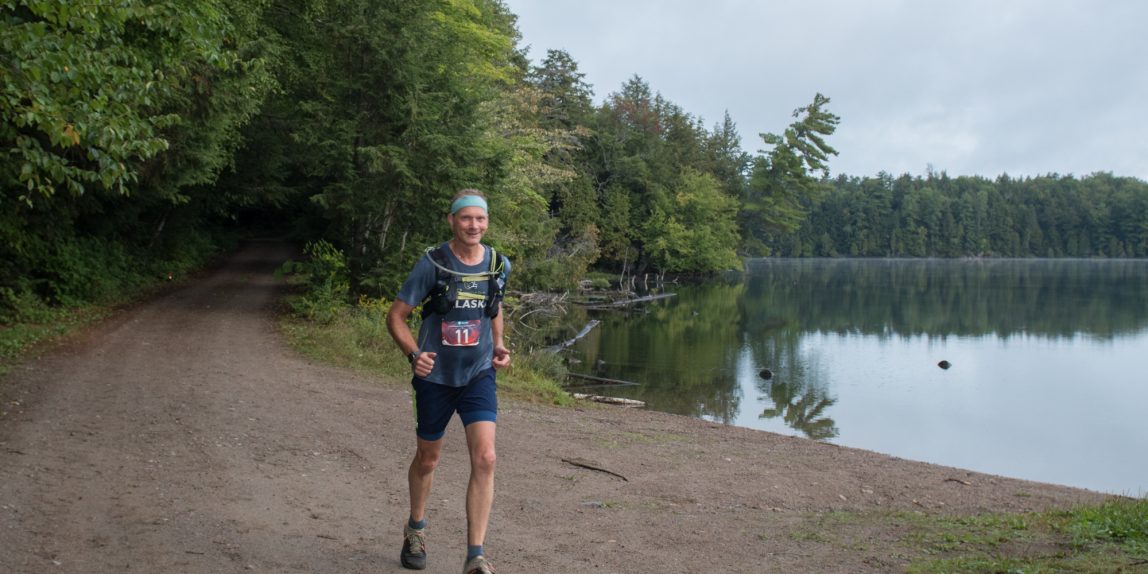 Summary: I scratched after 74.2 miles at aid station 7. I was having lots of muscle fatigue, likely because I had not been eating enough.

The longer version: I completed my first 100-mile ultra marathon in 2018, successfully running the Haliburton Forest Trail Race in a little over 28.5 hours. In my 2019 running of the race, I did not finish. I scratched at Aid Station 7, at around 1:30am Sunday morning. I had run 74.2 miles in a total of 19.5 hours. My 50-mile time was 10:27:47, which was around an hour faster than in 2018. My first marathon time was around 5 hours, and my second marathon total was around 10:40 (these do not include non-moving time). Here are some thoughts and reflections. The 100-mile turnaround
Ilana dropped me off at Haliburton Forest on Friday night, September 6, and I attended the 100-miler briefing. I camped out that night in the tent area, near the starting line. The race started at 6:00am on Saturday, September 7. The race has a 30-hour cutoff, and consists of a double out-and-back (25 miles each section). There are seven aid stations. The course is a mixture of single-track trails, double-track (ATV) trails, and various dirt, gravel and logging roads. It includes some very hilly sections.

My first 50 miles seemed great to me. I was feeling strong, and ran faster than in 2018 (around a half-hour faster per marathon). My hydration plan was working fine, with a Platypus fill-up at every aid station (AS) to drink around 26 ounces of Gatorade at each, plus water sips from my hydration backpack. I also was eating gels/bloks and a few other things (PB&J at aid stations, a Kind bar).

My shoes were a new type, and I had run twice in them: once for 10 miles, and once for 26 miles. They seemed good, but proved to be a little too stiff in the top. I then began developing a blister and sore spot in my right heel. These were New Balance “Fresh Foam Trail” shoes. Feet, taped up and ready to race
By the end of the first 50, I was also developing some rub around my athletic supporter. I mostly felt it in my rear. But it turned out there was rub all around. The next day, I found my hydration pack had also rubbed against my back, though it never bothered me during the race. No doubt some of this rub was due to the rain, since my gear was almost identical to last year when I didn’t have such problems. I use “Tom’s Ultra Shield” in areas prone to rubbing, and I think all the rain made it wear off, and then wetness made it difficult to re-apply.

I began having a hard time around when darkness was falling. I got chilly out of AS2 after changing to my nighttime clothes, and trying to bandage my feet (rain made this difficult), after completing the outbound Normac loop (i.e., around mile 58). It had been raining, often quite hard, off and on since perhaps 1pm. I warmed up fairly quickly after leaving AS2, and there was almost no rain for the rest of the race. Things were damp and drippy, though.

Outbound from AS2 and all the way to AS5, the Poacher’s, Ben’s and Krista trails were extremely slick and muddy from the rain. I found it impossible to have confident footing, and slipped a number of times. I suffered no injuries other than a scraped hand, but it made me go slowly, at around 4mph.

My leg muscles were ok, but getting somewhat fatigued. I was rubbing them (quad, hams, glutes and sides) as I walked. I was walking more than running, but had plenty of energy to run slowly, even up hills.

I was developing a sore stomach, and even had a little nausea. I had taken a GERD pill, but had no TUMS or other regular antacids – I wish I had. I got some soup at AS4, and hot water at AS4, AS5 and AS6. At AS5, I switched to my regular Salomon Ultra Pro Trail shoes, which helped my feet. I also added my fleece running shirt, which made me very comfortable. I never needed to wear my gloves, and only put my buff hat on for a short while. It wasn’t that cold, but everything was wet.

Due to my sore stomach, I avoided gels/bloks, and basically didn’t have snacks at the AS from miles 50-74.2. I just didn’t feel hungry. This was a mistake. I should have taken some trail mix or potato or something else non-sweet. The sugar I had been eating was a problem, I think, creating too much acid. I had coffee at AS5 which was great, but might have soured my stomach even more.

Out of AS6, I basically bonked. I was going 3mph, then 2mph – even on easy terrain. AS6 to AS7 is not hard going: it’s relatively flat, and the trails had great visibility. Somewhere in the middle of this 6-mile segment, I started thinking about scratching. I did the math: 25 miles at 2mph was 12.5 hours,and the race ended in 11 hours (it was around 1am, and originally I thought I would be at AS7 by 11pm!). I decided that was a good idea: it felt right to me. My mind was not incredibly clear at that time – for example, I could barely get sentences together when talking to people at the aid stations. But scratching felt right. And at AS7, I did. The wonderful folks there made sure I was ok, and helped arrange for a ride back to base.

At that point, I didn’t have nearly as much specific pain in my legs as I did after 2018. In that race, my quads were so sore I could not land (even though I could push off), which meant I was moving perhaps 3mph for the last few hours: a fairly slow shuffling walking pace. This year, I had more of a general muscle fatigue or exhaustion in my upper legs – this is something that I have almost never experienced. I had a general burning feeling that I think was lactic acid buildup. My hydration (and urination) remained good, including the day after, but my guess is there were a lot of toxins accumulating from the exhaustion.

The pain in my legs took many hours, perhaps a day or so, to fully dissipate. My right heel was sore for days, and was actually more damaged than I realized (it was a deep pain, not just a blister). The groin rub was much worse than it felt during the run. It was the pain of exhaustion, though – the general muscle soreness in my upper legs – that made me incapable of running at more than a hobbling pace. This was the main impediment to continuing.

In retrospect, I wish I had instead sat and thought about it, before deciding to scratch. Even if I sat for an hour after arriving at aid station 7, I could have had stuff to eat and drink (maybe even pie) and then tried running to & from the turnaround. At that point, perhaps I would have felt well enough to run the remaining 25 miles. Or maybe not, and I could scratch then.

Instead, I took a ride back to base camp and tried to get some sleep. Boy, I was hungry that day, and the next!

For next time: First, I will still try to get in some very long runs this fall, if only to reassure myself that I am up for it. General training ideas for the next year are to (a) more consistently add strength training, and maintain all through summer running training season; (b) get in a few more very long runs. The total training miles I ran in 2019 were comparable to 2018, and my legs felt much stronger for the first 50 miles. If I could have kept eating, maybe everything would have been different. Though that rain, and the slick ground, created some very unpleasant trail conditions on the second outbound journey from AS2 to AS5, heading towards mile 75.

The other training that would be useful is to run a few times on Normac and Poacher’s (maybe Ben’s and Krista, too). I go slowly on that rough terrain, whether it’s light or dark, wet or dry. I think I could get better: more confident and faster. My home training, especially on single-track trails, can help, but I don’t have anything that is similar to the Haliburton forest trails.

For food, the Scott Jurek “Eat and Run” book has some ideas about burritos and other trail food. I need to have more than just pure sugar, and the AS food is mostly not what I think I need. PB&J is good, and maybe I should try to have more fruit. But burritos or other non-sugar-based carbs need to be part of my drop bags. I also need to think of dropping my own soups, broths or hot waters (yes, lots of thermoses!).

These foods are things I need to practice with, during my training runs. The night before the race