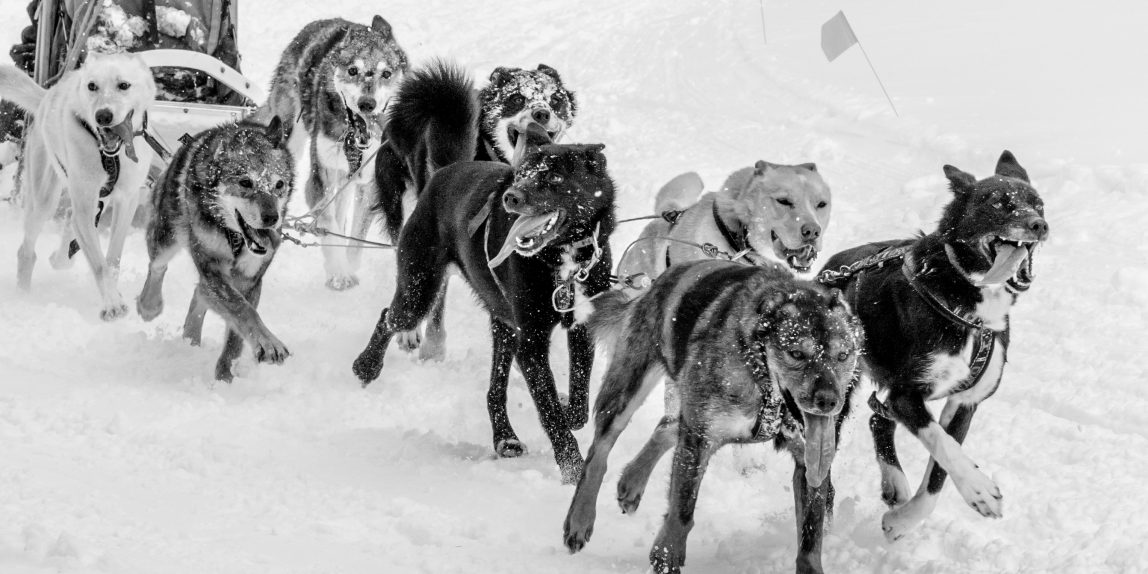 The StinkyPups had a fun time at the 14th annual Haliburton Highlands Dogsled Derby. Being distance mushers, we almost didn’t venture out for the 6 mile sprint race. Packing up everyone and driving an hour to a race just to race 6 miles seems silly. But, then again our longest run this season was only 7 miles. Additionally, it was the last mush of the year due to warm temperatures, and the snowmachines would be out on our trails, so we said “let’s go!”

On Friday night (March 5) Ilana & Greg drove to Haliburton to register for the race and for the bib draw. There were many different classes to sign up for (skijoring, 4 dog, 6 dog, 8 dog, novice, etc.). We signed up one team for the 8 dog class.

The musher’s meeting was Saturday morning, so I (Ilana) left L’Amable at 6:30am to get to the 8:00am meeting and pick up bib #112. I was second out in the 8 dog class.  I drove home and took a nap, and we saddled everyone up in the afternoon. The race started at 3:15pm.

We had a smooth StinkyPup start without any mishaps, except for Medusa trying to twist and unharness herself.  The temperature was around 29F. Since I’m used to running with weight in the sled, I decided to keep my 40lbs of dog food in the sled. I was worried I’d flip the sled if I didn’t have weight.  I stopped a couple of times to untangle dogs, and was passed by other teams around three times. I came in last with a time of 30:06.52.

The race continued on Sunday. We packed everyone up and drove out again. It was warmer with a temp of 34F  — a little warm for the Stinkers. Same musher, same dogs. In fact, they marked the dogs with blue spray paint to ensure I didn’t switch dogs.

I was bib #119. This time I decided to be brave and mush without anything in my sled. It worked out fine, although I did almost lose my team when I stopped to untangle Recluse and the dogs popped the hook. I came in last again, with a time of 27:22.35.

We boxed the dogs and went to the banquet– where I actually won $40 bucks! I’ve never won anything but red lanterns, so this was a treat.